How to install composer and docker you may find here and here. Also, you would have to have git installed.

So let's start with some words about the two projects - first drupal-composer is a perfect kickstart that will help you to easily maintain your module dependencies in Drupal 8 with the help of composer. We will not get into too many details about it, as the project Github page covers it pretty well.

Regarding the docker4drupal project - it is a docker compose oriented setup that presets definitions of several Docker containers that are needed in order to build and have a functional development environment literally in minutes.

Let's start with creating our drupal-composer setup. In order to do that you may just change from the terminal to the folder where you have your Drupal projects and execute the following:

this will create a folder, called drupaltuto with the content of the drupal-composer boilerplate. As a folder structure it should look something like this:

This means we have our Drupal codebase prepared and built. Let's now go ahead and take care of building a server where we could install, test and further develop our Drupal 8 project. As we said we will use the docker4drupal. If we go to the GitHub page of the project and get the GitHub link to it we can just clone it in another folder like this:

Then we could just remove the .git file and then copy the content of the drupal_docker_server into the drupaltuto folder like this:

It is time to change a bit the docker_compose.yml file in order to have it ready for our project structure. Basically, we have declared all the containers that we will create and they will be connected internally and will be part of an environment on which we will run our Drupal 8 projects.

If we start with the PHP container - there is a possibility to have directly Drupal installed but I like more the idea of having a PHP, let's say 7.x there and that we have our Drupal codebase handled by our neat drupal composer project setup. So in the lines of the PHP container - we would comment out the image with the Drupal and we will uncomment a PHP image. Also, we will change the volumes path so that it starts from the current folder. It will look like this:

Also for the nginx volumes, we could change the volumes as well:

and we are ready to build. We would start Docker and then open the terminal.

In the terminal, we would have to make sure we are in the drupaltuto folder and we could build all the containers like this:

Afterwards, we could access our Drupal install screen by going to http://drupal.docker.localhost:8888

How it worked so smooth you would ask... Well, the drupal composer project is creating a folder structure where there is a web folder, containing the whole Drupal codebase and the PHP and Nginx containers are expecting the web folder in the root folder too. As we merged the two projects - it is there and you are able to access it directly under http://drupal.docker.localhost:8888 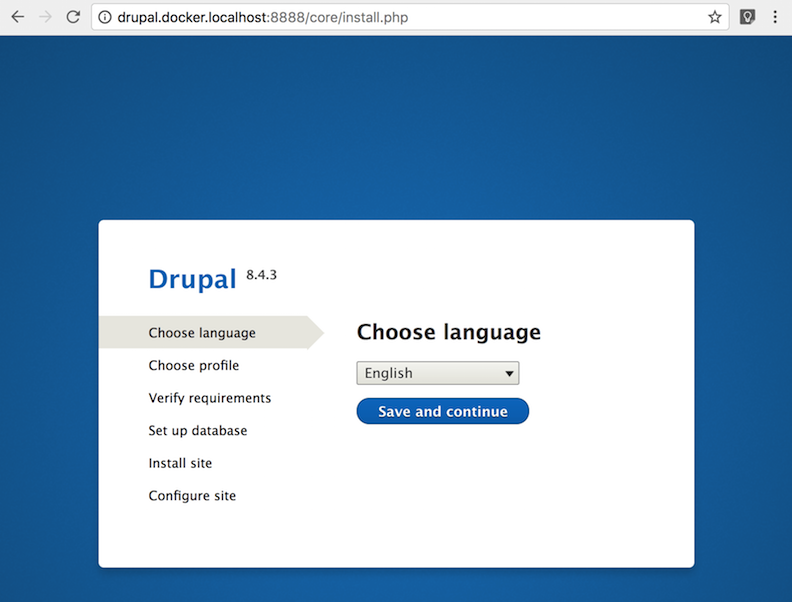 And the last important bit that you have to know when installing is that when you are on the screen where you input the database cridentials - you would have to use the ones specified in the docker_compose.yml :

as for inputting the host - you would have to click on advanced when you are on the screen with the database credentials.

If you want to compare something - feel free to check the code from the example on our GitHub page and also you may see the whole process in this video.

If you need some help or you search a Drupal freelancer don't hesitate to contact us.

All the content is FREE but I still need your help